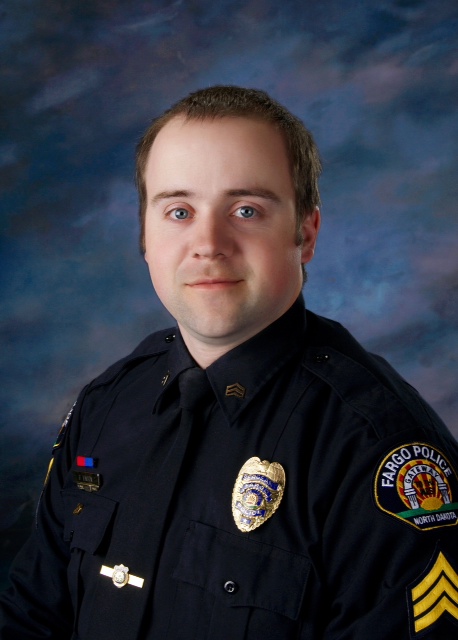 My name is George Vinson. I am a sergeant with the Fargo Police Department. I have been with FPD for 10 years. During my time at FPD, I have been a PTO (commonly referred to as FTO), CSI, narcotics detective, and am currently a K9 handler. I am a patrol sergeant assigned to the day shift.

In the summer of 1985 I was a kid riding my bike. I fell off my bike and the handle bar jammed into my ribs. My ribs took a long time to heal and long story short, some time later, I was diagnosed with Ewing Sarcoma. I underwent a major surgery to remove a part of one of my ribs. However, it was not successful in removing the entire tumor. A second surgery was needed to remove the entire rib. Then I went through chemo. I was five years old. I was an impatient seemingly forever. I remember one day a stranger came into my room dressed as a race car driver. The night before, he had won a race and was holding his trophy. He gave that trophy to me that day because he wanted me to feel better and feel like a kid again. I will never forget that. To this day, I do not know who he was. I made it through and after years of periodic checkups, I was cured in 1990.

In the summer of 2011, I was on duty with my K9 partner, Earl. We had enjoyed visiting kids struggling with cancer and chemo on a few occasions. On this day, I was listening to the radio when a benefit was announced. The benefit was for an eight year old girl with Ewing Sarcoma. A few days later, K9 Earl and I attended that benefit. I brought along one of K9 Earl’s medals he had earned and gave it to the little girl. She laughed and played with Earl while I spoke to her mom and assured her, if I could do it, so could she. When I left that day, I sat in my car and prayed to God. I asked God to give me cancer again so that another family wouldn’t have to go through that. I had forgotten about that prayer until January 2012.

A few months leading up to January 16, 2012 I was experiencing severe heartburn. None of the medications or procedures were working and my doctor couldn’t seem to find the problem. I did a little research on the internet and learned about a tumor called a gastrinoma. The diagnosis tool for this tumor, which my doctor had also now mentioned, was a CT scan. My doctor order the CT scan for January 15th. On the morning of the 16th, my nurse called and said the doctor needed to see me in 15 minutes. I knew what was about to happen. I was diagnosed with a softball size tumor on my liver. It was a gastrinoma. I thought about the prayer I had made only a few short months ago. My prayer was answered. Now it was time to kick this thing’s ass again.

In early February 2012, I underwent an operation to remove approximately 1/3 of my liver. While recovering in the hospital, one night before I was scheduled to go home, I went into a seizure like panic attack. I ended up being diagnosed with a liver abscess. Needless to say, my stay in the hospital was extended.

Today I am cancer free still undergoing periodic checkups. I’ll never underestimate the power of God and family. Without them I would not be here today.